An Introduction to Aluminum Extrusion and Profiles 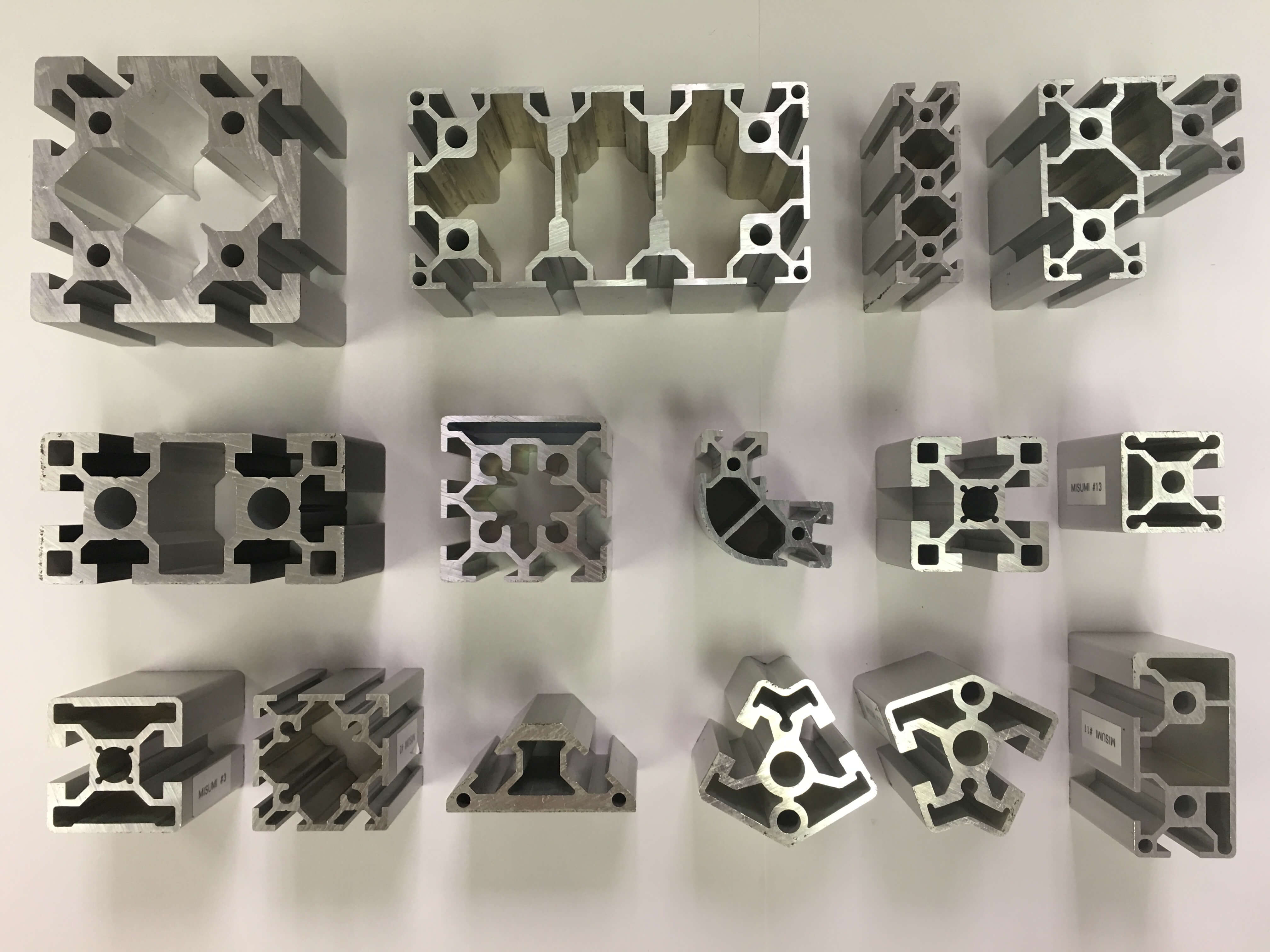 An Introduction to Aluminum Extrusion and Profiles

The aluminum extrusion (also known by ‘aluminum frames’) forming process is a bulk plastic deformation process. First, a billet of aluminum is preheated to a specified temperature that is still comfortably below the material melting point in order to facilitate the plastic flow of the material.  The heated billet is then forced through a tooling die that is designed to shape and form the billet into the corresponding profile cross section. This industrial extrusion process is analogous to the culinary technique used to make different types of pasta; and also a technique seen to form shapes in the children’s toy, Play-Doh.

Aluminum is a very commonly specified material for use in extrusions and shape profiles because it possesses mechanical characteristics that make it ideally suited for the shaping and forming metal from billet sections.  The high malleability of aluminum means that the metal can be readily shaped into a variety of sections without expending significant energy on the tooling or forming process, and the melting point of aluminum is also generally on the order of half that of ordinary steel. Both of these facts mean that the aluminum extrusion process has a relatively low energy footprint translating into low tooling and manufacturing costs. Finally, aluminum also possesses a high strength to weight ratio, making it an excellent choice for industrial applications.

A wide variety of intricate aluminum extrusion profile types can be created at varying thicknesses. These profiles can feature a wide variety of intricate void spaces, as necessitated by the end use application.  A wide range of internal voids are available in order to facilitate a wide variety of automation applications and also satisfy any performance weight requirements. The most common type of aluminum profile is the hollow beam profile which is simply a variation of the square profile. There are also other profile types such as the triangular, single radius, and L-shaped profile.

As a byproduct of the extrusion process, there are sometimes small, barely visible lines present on the surfaces of the profiles. This is a result of the extrusion tooling, and additional surface treatments can be specified to remove these lines. There are a few of secondary surface processing operations that can be performed such as face milling after the main extrusion forming process in order to improve the surface finish of the profile section. These processing operations can be specified in order to improve the geometry of the surface to improve the part profile by reducing the overall surface roughness of the extruded profile. These treatments are typically specified in applications that require precise positioning of the parts or where mating surfaces must be controlled tightly.  Surface treatments can also add additional corrosion resistance, improve the hardness of the profile, or even add electrical insulation to the extrusions.

Aluminum profiles are most commonly used across industrial automation applications such as automated motion applications on process lines and industries throughout manufacturing. They are strong and yet light enough that they yet can be easily man-handled and built into various configurations as necessitated by the automation structure.  Outside of the traditional automation applications, structural grade aluminum extrusions are even being specified as part of weight reduction efforts. In this sense, they are increasingly being employed as frames in other end use consumer products such as automobiles and LEED building projects. As more advanced aluminum alloys and surface coating techniques are developed, the uses are expanding into these new areas.

The word comes from the French foreign loan word façade/Adrien, which in turn comes from the Italian facciata, from faccia meaning face, ultimately from post-classical Latin facia. The earliest usage recorded by the Oxford English Dictionary is 1656.[3]

It was quite common in the Georgian period for existing houses in English towns to be given a fashionable new facade. For example, in the city of Bath, The Bunch of Grapes in Westgate Street appears to be a Georgian building, but the appearance is only skin deep and some of the interior rooms still have Jacobean plasterwork ceilings.[4]

This new construction has happened also in other places: in Santiago de Compostela the 3-metres-deep Casa do Cabido was built to match the architectural order of the square, and the main Churrigueresque facade of the Santiago de Compostela Cathedral, facing the Praza do Obradoiro, is actually encasing and concealing the older Portico of Glory.

In modern highrise building, the exterior walls are often suspended from the concrete floor slabs. Examples include curtain walls and precast concrete walls. The facade can at times be required to have a fire-resistance rating, for instance, if two buildings are very close together, to lower the likelihood of fire spreading from one building to another.

In general, the facade systems that are suspended or attached to the precast concrete slabs will be made from aluminium (powdercoated or anodized) or stainless steel. In recent years more lavish materials such as titanium have sometimes been used, but due to their cost and susceptibility to panel edge staining these have not been popular.

Whether rated or not, fire protection is always a design consideration. The melting point of aluminium, 660 °C (1,220 °F), is typically reached within minutes of the start of a fire. Firestops for such building joints can be qualified, too. Putting fire sprinkler systems on each floor has a profoundly positive effect on the fire safety of buildings with curtain walls.

Some building codes also limit the percentage of window area in exterior walls. When the exterior wall is not rated, the perimeter slab edge becomes a junction where rated slabs are abutting an unrated wall. For rated walls, one may also choose rated windows and fire doors, to maintain that wall's rating.

On a film set and within most themed attractions, many of the buildings are only facades, which are far cheaper than actual buildings, and not subject to building codes (within film sets). In film sets, they are simply held up with supports from behind, and sometimes have boxes for actors to step in and out of from the front if necessary for a scene. Within theme parks, they are usually decoration for the interior ride or attraction, which is based on a simple building design.

Glass is a non-crystalline, amorphous solid that is often transparent and has widespread practical, technological, and decorative uses in, for example, window panes, tableware, and optoelectronics. The most familiar, and historically the oldest, types of manufactured glass are "silicate glasses" based on the chemical compound silica (silicon dioxide, or quartz), the primary constituent of sand. The term glass, in popular usage, is often used to refer only to this type of material, which is familiar from use as window glass and in glass bottles. Of the many silica-based glasses that exist, ordinary glazing and container glass is formed from a specific type called soda-lime glass, composed of approximately 75% silicon dioxide (SiO2), sodium oxide (Na2O) from sodium carbonate (Na2CO3), calcium oxide (CaO), also called lime, and several minor additives.

Many applications of silicate glasses derive from their optical transparency, giving rise to their primary use as window panes. Glass will transmit, reflect and refract light; these qualities can be enhanced by cutting and polishing to make optical lenses, prisms, fine glassware, and optical fibers for high speed data transmission by light. Glass can be coloured by adding metallic salts, and can also be painted and printed with vitreous enamels. These qualities have led to the extensive use of glass in the manufacture of art objects and in particular, stained glass windows. Although brittle, silicate glass is extremely durable, and many examples of glass fragments exist from early glass-making cultures. Because glass can be formed or moulded into any shape, it has been traditionally used for vessels: bowls, vases, bottles, jars and drinking glasses. In its most solid forms it has also been used for paperweights, marbles, and beads. When extruded as glass fiber and matted as glass wool in a way to trap air, it becomes a thermal insulating material, and when these glass fibers are embedded into an organic polymer plastic, they are a key structural reinforcement part of the composite material fiberglass. Some objects historically were so commonly made of silicate glass that they are simply called by the name of the material, such as drinking glasses and eyeglasses.

Scientifically, "glass" is often defined in a broader sense, encompassing every solid that possesses a non-crystalline (that is, amorphous) structure at the atomic scale and that exhibits a glass transition when heated towards the liquid state. Porcelains and many polymer thermoplastics familiar from everyday use are glasses. These sorts of glasses can be made of quite different kinds of materials than silica: metallic alloys, ionic melts, aqueous solutions, molecular liquids, and polymers. For many applications, like glass bottles or eyewear, polymer glasses (acrylic glass, polycarbonate or polyethylene terephthalate) are a lighter alternative than traditional glass.